Home » Calendar » The âNatureâ of Sunlight. The path of sunlight from the core of the Sun to the wings of a bird and how to observe it. - Livestream »
Tweet 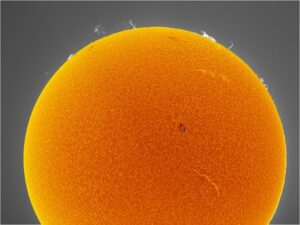 Stephen Ramsden is a wildlife photographer, solar astronomer, and the founderÂ and director of the highest volume âhands-onâ astronomy outreach nonprofit in the world, TheÂ Charlie Bates Solar Astronomy Project, named in memoriam for a fellow military veteran. HeÂ is a noted motivational science lecturer in the United States with lectures and outreach appearances at every major astronomy or science show in the states to his credit.Â Ramsdenâs lectures cover the importance of science education in the community and the physics, features and imaging/observing methods used in modern Solar Astronomy.

The program provides the highly acclaimed websites solarastronomy.org and solarscopereviews.com. CBSAP provides high tech STEM outreach absolutely free of charge to over 250,000 people worldwide annually. CBSAP currently operates in 22 countries providing state of the art narrowband solar observing and imaging to students from primary school to post graduate university level, and to the general public at major public festivals and events across the globe.