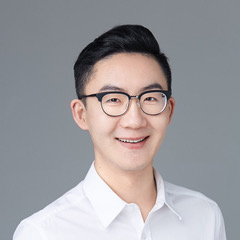 Megathrust earthquakes and their associated tsunamis cause some of the worst natural disasters. In addition to earthquakes, a wide range of slip behaviors is present at subduction zones, including slow earthquakes that span multiple orders of spatial and temporal scales. Episodic tremor and slip (ETS) events may provide insights into the rupture characteristics of megathrust earthquakes, and understanding ETS initiation processes may shed light on earthquake nucleation processes. However, the nucleation processes of ETS events are poorly understood despite their quasi-periodic occurrence. Here we show that the 2009 Cascadia ETS event was likely dynamically triggered by the M6.9 Canal de Ballenas earthquake in the Gulf of California, about 2300 km away. The M6.9 earthquake ruptured northward towards Cascadia at a speed exceeding local shear wave speed - a supershear earthquake. The supershear rupture caused abnormally large ground motions and dynamic strains across the North American plate boundary and dynamically triggered seismicity in California. Further, the earthquake dynamically triggered three very low frequency earthquakes (VLFEs) in Cascadia upon the arrival of its surface waves, including one with a moment magnitude of 5.7. These VLFEs are adjacent to the slip zone of the 2009 Cascadia ETS event and likely caused the onset of the ETS event. We show that slow earthquakes at Cascadia are sensitive to external stress perturbations and ETS events can be dynamically triggered. Our results are consistent with the downdip edge of the Cascadia megathrust fault being weak due to the overpressurized fluid. Consequentially, slip events can be easily initiated in this region, which would load the adjacent fault patches and may act as a catalyst to trigger a sequence of slip events.