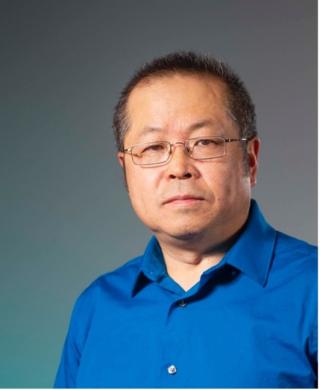 What is really inside a proton? The fundamental building blocks of the proton, quarks and gluons, have been known for decades. However, we still have an incomplete understanding of how these particles and their dynamics give rise to the quantum bound state of the proton and its physical properties, such as for example its spin and mass. The two âupâ and one âdownâ quarks that comprise the proton in the simplest picture account only for a few percent of the proton mass, the bulk of which is in the form of quark and gluon kinetic and potential energy from the strong force. An essential feature of this force, as described by quantum chromodynamics, is its ability to create quark-antiquark pairs through quantum fluctuation inside the proton that exist only for a very short time. In this picture of quark-antiquark creation by the strong force, the probability distributions as a function of momentum for the presence of âupâ and âdownâ antiquarks should be nearly identical, since their masses are quite similar and small compared to the mass of the proton. However, our recent results from the Fermilab E906/SeaQuest experiment at the Main Injector show evidence that they are very different, with more abundant âdownâ antimatter quarks than âupâ antimatter quarks over a wide range of momentum fraction of the parent proton. These results revive interest in several proposed mechanisms as the origin of this antiquark asymmetry in the proton and point to the future measurements at the follow-up E1039/SpinQuest experiment with polarized proton/neutron targets that can distinguish between these mechanisms. Furthermore, the recent new initiative to search for Dark Sector physics with moderate upgrade to the SeaQuest/SpinQuest spectrometer will also be discussed briefly at the end.