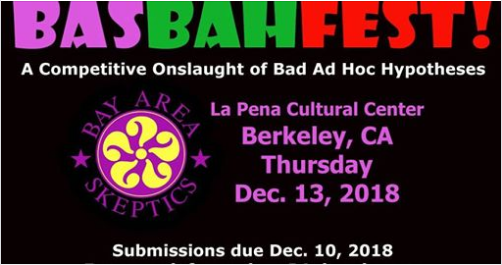 BAS is inviting you to participate in a Bad Ad Hoc Hypothesis program where YOU will be the presenter. Pretty much all Ad Hoc hypotheses are bad, but the Bad Ad Hoc Hypothesis (or BAH) has become something of a term of art among science fans. Examples of BAH Fests can be found on YouTube, and you are encouraged to visit them.

An Ad Hoc hypothesis can refer to a number of applications. Commonly, it refers to the effort to âsaveâ a theory or hypothesis from rejection by adding on a condition. So if you canât see the fairies I claim live in the garden, I could hypothesize that they are sometimes invisible. The claims of individuals who fail to perform paranormal feats because of the presence of a skeptic is another example - the âPsi is shyâ complaint. BAHs can also involve making up a theory after the data is collected, as in the original BAH, by Zach Weinersmith.

The best BAHs, of course, must utilize actual science, even if it is in pursuit of a ridiculous premise.

For BASâs BAH program, we will accept lots of BAH variants: making up a theory after the data are collected is fair game, as are special pleadings of various types. We ask you to submit to baskeptics@gmail.com a title for your talk and an abstract (of length between a few sentences to a paragraph), your name, and contact information. Powerpoint is optional; length is not. Keep your talk to 10 minutes. We will notify you if your abstract has been selected.

Deadline for titles and abstracts is Monday, December 10.