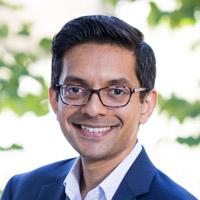 Shortly after the birth of the Universe, space was filled with glowing red-hot plasma. As the universe expanded and cooled over the next 13.8 billion years, the glow of that plasma redshifted to longer wavelengths and is observed today by our telescopes as the Cosmic Microwave Background (CMB). Spatial variations of CMB intensity and polarization provide a record of conditions in the early universe, possibly encoding signatures from cosmic inflation and unique traces of relic particles. Additionally, the CMB âbacklightsâ large-scale structure and picks up the influence of all matter, including neutrinos, on its way to us, in a measurable effect called CMB lensing.Â

CMB-S4 is a next-generation ground-based CMB experiment with sufficient planned sensitivity to cross critical science thresholds in the above-mentioned areas and the potential to make discoveries. CMB-S4 will map over 40% of the Southern sky from Chile and Antarctica starting in the late 2020s. It will complement DES, DESI and LSST in aiding our understanding of cosmic acceleration, and it will complement the long-baseline and beta-endpoint neutrino programs, as well as direct and indirect dark matter searches. CMB-S4 will be made possibly by continuing increases in the sensitivity of ground-based CMB imaging instrumentation over the past few decades, as well as advancement of our understanding and mitigation of systematic errors. Putting together CMB-S4 will take the combined effort of a significant fraction of the international CMB community, as well as support and participation from the US cosmology and HEP communities at large.