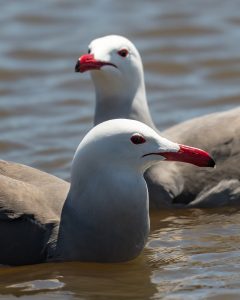 Heermannâs Gulls were thought to breed exclusively on small islands in the Gulf of California and off the Mexican coast, where their numbers are declining due to warming seas and overfishing. But in 1999, a few nested on a man-made island on Roberts Lake in Seaside, California - the only known nesting colony of Heermannâs Gulls in the United States. Learn about the natural history of Heermannâs Gulls, the Seaside colonyâs growth to 100 individuals, its environmental challenges, and efforts by Monterey Audubon and others to help the colony by monitoring and deployment of a floating nesting island.

Email to a Friend