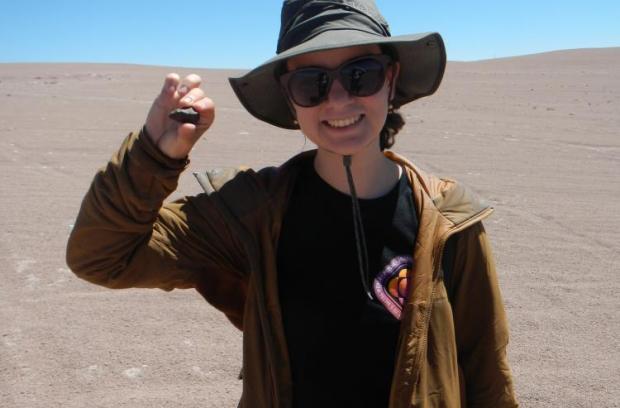 Most meteorites are remnant pieces of planetesimals, the first 1- to 1000-km planetary bodies to form in the solar system. Meteorites are divided into two principal groupings: chondrites (unmelted accretional aggregates) and achondrites (products of planetary melting). This division has commonly been interpreted as evidence that planetesimals either never melted or otherwise melted throughout their entire interiors - a view that is challenged by the idea that some planetesimals were only partially differentiated, with both chondritic and achondritic constituent materials. Understanding the phenomenon of partial differentiation can place important constraints on the timing and mechanism of planetesimal formation and evolution. However, little remains known about the natures and structures of these objects, partly because none have so far been identified in the asteroid population. The IIE iron meteorites contain both achondritic and chondritic silicate inclusions of common origin and are proposed to come from a partially-differentiated body. Here, I will talk about paleomagnetic measurements we conducted on three IIE irons to search for evidence of a molten metallic core in order to constrain the internal structure of the IIE parent planetesimal. We find that the meteorites experienced a magnetic field most likely powered by a core dynamo, implying that metallic core, melted silicates and chondritic material coexisted on the IIE parent body. Combining these measurements with geochronometry data, we constrain the timing of the IIE dynamo, which points towards a structure with a substantial metallic core overlain by achondritic and chondritic silicates. This result further challenges the topology of existing meteorite classification schemes, and provides some constraints on planetary accretion and differentiation mechanisms allowing for the coexistence of melted and unmelted material on the same body.